David Addington is Chief of Staff for Vice President Cheney. Here's an excerpt from a profile about him in the New Yorker from a couple of years ago. 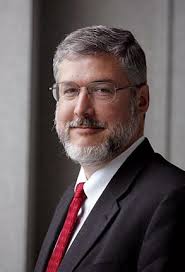 Most Americans, even those who follow politics closely, have probably never heard of Addington. But current and former Administration officials say that he has played a central role in shaping the Administration’s legal strategy for the war on terror. Known as the New Paradigm, this strategy rests on a reading of the Constitution that few legal scholars share—namely, that the President, as Commander-in-Chief, has the authority to disregard virtually all previously known legal boundaries, if national security demands it. Under this framework, statutes prohibiting torture, secret detention, and warrantless surveillance have been set aside.

Emphasis mine. According to many sources, he's been the author (or most senior legal support) of many of the most controversial legal policies of the Bush Administration. He was described by U.S. News and World Report as "the most powerful man you've never heard of".

He's the lawyer behind over 750 signing statements that President Bush has added to bills passed by Congress. He seems to have a different understanding of the Constitutional separation of powers, namely, that no one has the right to examine how executive decisions are made and that in times of war (which is always now since the War on Terror doesn't take a break) the President cannot be restrained by Congress nor any law, national or international.

Some results of this interpretation range from the benign and reasonable to the possibly criminal and include Bush and his team refusing requests for information (as in the case of Pat Tillman's death), documents (an F.B.I. and mob scandal), and clarification (the details of Cheney's energy task force), and has included their directly refusing to obey subpeonas in the investigation of the firing of federal prosecutors. In the last example, the executive branch has successfully avoided legal inquiry with the only consequence being two aides held in contempt by the House of Representatives but whose charges won't be pursued by the Justice Department because of executive privilege.

"Our political heritage is to be skeptical of executive power, because, in particular, there was skepticism of King George III." So says Jane Mayer, the author of the New Yorker article. But I can only guess we're no longer inheritors of that concern given the very real reduction of Presidential oversight over the last eight years.

Which leads me to admit - I feel like I can't be an informed voter without knowing what self-imposed limits an Obama or McCain or Biden or Palin presidency would place on their unrestrained and secret power. But even if they promised to restrain themselves...how would we ever know if they had?

massless.org continued... >> Defending against the spin. So frustrating. [Corre...